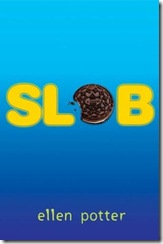 About a month ago, I wrote a post bemoaning the summer reading list choices my middle-school son Joe had.  He ended up picking SLOB by Ellen Potter, and we read it together.

I have to eat a little crow and admit that it was much better than I expected.  A friend who read my earlier post and who was familiar with some of the books on the list blamed the overall dour tone on “the two-sentence card catalogue descriptions.”  She may be right, because SLOB is an interesting tale of a sixth-grade boy, Owen Birnbaum, and his efforts at navigating middle school gym class, a perceived bully, and his own unresolved feelings about the mysterious death of his parents two years earlier.

One nice touch is the gradual way Potter reveals important plot details, which requires us at several points to revise our judgment of certain characters, and we also watch Owen work through his feelings about his parents, beginning with revenge and ending with acceptance verging on forgiveness and grace.

I also happened to like that the book is set in New York’s Upper West Side, and, being somewhat familiar with the area, I felt as if I was walking with Owen down Amsterdam Avenue and hanging out in Riverside Park.  The last scene in the book takes place in Riverside and suggests the changes that have taken place in Owen:

I said a prayer. I’ve never prayed before, so I don’t know if I did it right. I prayed that police would one day catch the man who killed my parents. But in case that didn’t happen, I prayed that karma would kick in. I prayed that the murderer would be the unluckiest man who ever lived. That he’d always be losing his wallet, missing the bus when it’s raining, pulling out his back, getting pelted by snowballs, or stepping in dog poop. I prayed that he would feel like crud five days out the week and have intestinal gas pains for the other two days.

I know that’s not exactly compassionate.

I folded the paper in quarters, ripped it in half, then again, and dropped it in the Hudson River. The pieces bobbed around for a moment, like they didn’t know what to do, until they were finally carried off by the wake of a passing tugboat.

At the last minute, I sent off one more prayer. That the man who murdered my parents has someone in his life who thinks he’s a better person than he actually is.

Ok. That really is the best I can do.

So, I guess Joe and I survived the experience and emerged better people.  A big part of what made it fun was reading it together and talking about it as we went.  He is now three weeks into the school year and is happy to be reading books he gets to pick.  As my wife says, as long as he’s reading, we’re happy.

Ok. That really is the best I can do.