Over the last couple of weeks, I’ve posted some entries about movies, and I guess because the summer is always a big moviegoing season, it makes sense that there would be a lot in the media about summer movies.

Because a lot of summer movies tend to be in the blockbuster category, I’ve found it interesting that Mahnola Dargis and A.O. Scott have written two pieces about movie audiences–specifically about men and women as two distinct audiences.  Dargis’s article is titled “Few Summer Movies Aimed at Women,” and Scott’s is “Bridesmaids Allows Women to be Funny.”  The implicit, or explicit, argument is that men and women don’t like the same kind of movies and–in the case of comedies–don’t laugh at the same things.  This also has implications in casting, since the belief is that a movie with male leads will do better at the box office than a “chick flick.” 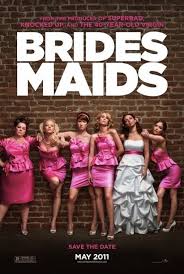 I wonder how much truth is in that premise.  While there’s no denying the box office draw of the Hangover and X-Men franchises, why is it surprising to studios that films like Bridesmaids or Mamma Mia do as well as they do?  Is it because they think women don’t go to movies as much as men or because they think no men will go to see these movies–that the audience is solely female?  Likewise, do the studios assume that the only women going to action movies are on a date and have no say-so in the movie choice?

Even though I’ve brought up at least two separate issues here, I thought I’d try a simple poll regarding comedy.  Is comedy as gender-specific as studios seem to think it is?  You decide.