WARNING: the following contains a fair amount of griping and moaning.  I’ve edited out objectionable language.

I remember Saturdays growing up being a rather calm affair.  Waking up relatively early to watch cartoons most weeks, except for the occasional attempt at sleeping in, which was usually interrupted by my dad standing at the end of the bed, waiting for a few minutes and then exclaiming, “you gonna sleep your life away?”  Apparently, there was much to be lost by 8:00 am.

Fast forward forty-five years.  At 6:30 the dogs begin their day, which sets the five-year-old in motion.  One might think she’d simply go out to the family room, turn on the tv, and entertain herself for a half hour while I get my eyes open.  And, in fact, she’s happy to do that, as well as helping herself to a jar of peanut butter, which she’s happy to share with the dogs.  In other words, sleeping in at this point, if possible, is not advisable.

Melissa does most of the cooking around here, but Saturdays are pancakes or waffles a la Dad.  Things move relatively smoothly through this phase, as long as I don’t get too much “help.”  Then comes the dreaded phrase, “ok, guys, it’s time to pick up the house a bit.”  Suddenly, it appears as if I am the only who lives in this house, since the air is filled with rhetoric straight out of the courtroom or negotiating table: “I did not play with that,” “she’s not helping,” “I will clean up this half of the room because that’s the only place I was.”

At which point Dad begins to turn a bilious shade of green, his biceps and chest begin expanding, and the buttons pop off his shirt.  I think of all those helpful lists of house rules  the supernanny claims does the trick, and I cast 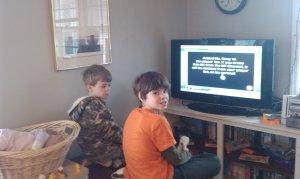 a resentful glance at the copies of Real Simple lying around: “De-clutter in 15 Minutes!” “Organizing that works!”  These articles always feature some Nordic-looking mom sitting in an all-white kitchen with a bowl of fresh lemons on the counter, while her surely-drugged, J. Crew-dressed kids bake cookies on their own and help each other with their homework.  If there are pets, they are busy wiping their own feet before coming in.

I have yet to see a picture featuring Legos strewn on the floor, a cute beagle chewing a Croc, while a kindergartner with a sticky face eats dog food out of the pantry.  I’m not saying any of that happens around here, of course, just that I never see it in a magazine. 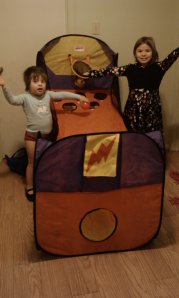 So, after getting thirty minutes of straightening out of them (if I’m lucky and the stars are aligned), chaos resumes.  What keeps me off the ledge are moments of seeing them play well together, such as Joe trying to show Josh how a game on Wii works, or Amy challenging Lauryn to a game of arcade ball in the hallway.  Maybe we can have a fire later; I have some magazines that will work well to get it started.