I read an interesting article in today’s Times, titled “Wonder Dog,” about the amazing ways service dogs can affect the lives of their families. The opening anecdote focused on a family in Georgia whose son has behavioral and cognitive issues stemming from prenatal exposure to alcohol. After trying all kinds of interventions, the mom was encouraged to consider a dog who was specifically trained to intervene in her son’s frequent tantrums. Over time, the family has seen the tantrums decrease, and they have also seen some striking developments in their son’s cognitive development.

The article also talks about the training process these dogs go through, which is rigorous and highly specific. They can be trained to perform physical tasks in a home environment–everything from opening doors and turning on light switches to getting items out of the refrigerator and helping someone undress–as well as to recognize physical symptoms, such as impending seizures. Here is a video showing the training process in action.

Around our house, we don’t have dogs trained for service. At times, one of the 14-yr-old “seniors”–Buddy–forgets that he’s housetrained. But, as this photo attests, we’re a thoroughly integrated family. The dogs let us know when the atmospheric pressure drops and a front is moving in, Digory–the other “old man”–makes frequent rounds of the house to make sure everyone is accounted for, and the beagles . . . well, the beagles make sure that any crumbs get licked up, whether they’re on the floor, on a low table, or in an open pantry closet.

Tomorrow I have another date with Chad. While you’re lowering your eyebrows, let me explain that Chad is the optician I have gotten to know personally over the last year.  You could say Josh brought us together.   OK, lower your eyebrows again–Josh is my six-year-old son, who was diagnosed with a lazy eye three years ago.

In those three years, Josh has gone through four pairs of glasses (I think. . . . Could be five).

Pair #1 fell victim to being pair #1: taken off 15 times in 10 minutes,thrown across a room with dramatic flair (he was 3), and eventually found by one of our dogs.  A dog who likes plastic.

Pair #2 was purchased while Pair #1 was still somewhat wearable, so for a short time we had a “back-up” pair.  I don’t know about your experience with “back-up” glasses, but I believe there is a corollary to Murphy’s Law: the speed with which an item is lost is multiplied by the number of replacement items kept on hand.  Also, the item which is in better condition will be lost first and will stay lost until someone or something . . . say, a plastic-loving dog, stumbles upon it.

I don’t remember much about Pair #3, except that one of the lenses kept popping out.  Keep in mind that, with Josh’s lazy eye, we are patching the good eye to make the weak one stronger.  This means that, while paying for two lenses, we have really only been using one (I looked but couldn’t find monocles in the kids’ section).  I offer this information for you to consider as you speculate as to which of the two lenses kept popping out, eventually becoming a milk bone.

It was during #3 that I met Chad.  Before then, I kind of hoped I would never get the same optician twice, since I was feeling somewhat embarrassed to bring mangled pieces (in a stylish Versace case, mind you), with the hopes that someone could wave a wand over them, say “Reparo,” and we would get a few more months’ reprieve.  But Chad was just so darned cheerful, almost as if he welcomed the challenge.  After the third time, we were on a first name basis.  He was a like a friendly neighborhood bartender; I’d come in, and he’d say, “The usual?”

So pair #4.  What can I say?  I got lax and overconfident.  After months of pulling in the driveway at the end of the day and saying, “Hand them over,” I thought we had established the importance of knowing at all times where they were: either very high up or on his head.  Then today came.  A sunny, beautifully warm, May Kentucky day.  The backyard called.  The swingset called.  The hose with five different spray settings called.  All I can figure out is that, somewhere between playing in the mud puddle and eating pizza, the glasses got left on the patio table.  The same patio to which the dogs were consigned while we ate.  I found the glasses later, temples chewed, one lens popped out (yes, that lens).  They are now in that same Versace case, awaiting another “adjustment.” 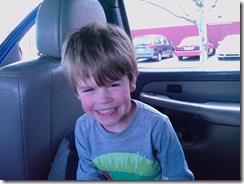